July 1 marks the third anniversary of the great Million Man March in Tripoli in support of Libyan leader Muammar Gaddafi. Sources said as much as 1.7 million people, meaning around 95% of the population of Tripoli and one third of the entire population of Libya, turned out to demand an end to the “humanitarian” NATO bombings of Libya – still the event has gone unreported by the mainstream media.

The following is a (slightly edited) translation/summary of Gaddafi’s speech of July 1, 2011, by Karim Budabuss of the yet no longer existing Facebook page VivaGaddafi. It is our wish that the freedom loving Libyans who still suffer great hardships as a result of NATO’s illegal and devastating war, will find the courage and strength to unite and to ultimately defeat the occupiers of their country. Sweet will be the victory of the wretched.

The leader is talking now. He is saying that this is a historical day, and he is challenging Sarkozy, Cameron and Obama to switch on their TVs and watch the crowds and he is saying that they will find out that they are delusional because they entered a war which they never win. He also says: if you continue targeting our houses we can do the same because Europe is not far away. But he said let’s not do this, and watch the crowds, kids and women. They are not here because I ordered them to, it is their free will. In this war you are not facing me, you are facing these crowds. I am nothing, if you want peace with Libyans, it is up to the crowds. If you want anything , negotiate with the crowds. The regime is not Gaddafi’s regime, it is a Libyan regime. Even if many got scared, defected and escaped, the Libyans will remain, and each coward will be replaced with a hero. Is it an act of democracy to bomb the civilians? We don’t want a democracy which comes with bombs. The socialist Jamahiriya will win, the real democracy which serves the people. I advise you to stop bombing, and stop becoming mercenaries for some rebels. The Libyans said their words, they marched, their tribes made it clear that the future is for the Libyans, the oil is for Libya, Libya is ours. You are delusional, a group of traitors convinced you that Libya is easy to get, you hired mercenaries, propaganda, psychological war, all that didn’t allow you to make any progress on the ground. Turn on your TVs and watch the longest Libyan flag, 4.5 km. I didn’t make this flag, people donated to make this flag. Those rebels are no different from those who betrayed Libya during the Italian invasion. Libyan people go in millions without weapons to liberate the regions under rebel control. You Libyan people are the only one who can finish this war with a victory. If they want to negotiate we welcome that, otherwise we are continuing and they are definitely losing, no matter how many weapons they drop with parachutes to the rebels. We will not betray our history or our children and their future. The glory is for you brave Libyans, the struggle will continue. 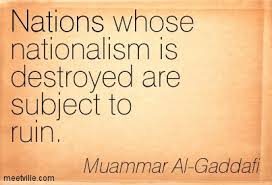